Dealing with power outages in the Greek Municipality of Halki

About a year has passed since the Decido project officially started. Four countries are involved in three scenarios of disasters, fires in Spain and Finland, floods in Italy, and sudden power outages in Greece.

Contacts with the Municipality of Halki are progressing and the preparations for the beginning of the pilot have already begun! Executives of the Municipality have been informed and agreed on the future implementation plans of the pilot and even offered to participate and assist in the formulation of a plan for dealing with sudden power outages and in its immediate and on-site implementation in the future.

People generally consider a power outage as something temporary – and in most cases, just a little frustrating – but for a community the consequences can be far more serious than a simple internet disconnection, even catastrophic sometimes. Public buildings and infrastructure of significant importance, such as hospitals, police stations and fire departments can severely malfunction leading to even endangering the citizens’ lives.

Halki is a small island, and we learn from the deputy mayor Mr. Roussakis that it is majorly energy dependent on the larger neighboring island of Rhodes. The need to develop a policy for dealing with such disasters in the most efficient way possible, is clear. 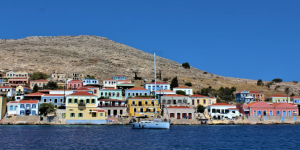 This need is going to be met by the anticipated Decido platform. Within the framework of Decido, backed by the European Open Science Cloud (EOSC) infrastructure, the Greek city network Sustainable City will aid the Municipality of Halki to co-create, adapt, and implement an evidence-based policy in the field of power outages.