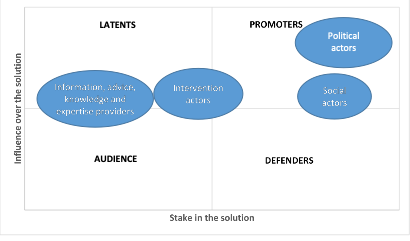 The stakeholders involved have been grouped into the following four categories valid for all DECIDO’s pilots:

Along with this categorisation, the stakeholder map has been an exercise to identify all the actors that should be involved in the collaborative design of policies for emergency situations in the four DECIDO pilots , detailing their classification, description and contribution to DECIDO. In the same way, the Map of Stakeholders diagram has also been created contrasting their “Stake in the solution” and the “Influence over the solution”: